About the Artist – Andy Cobb

Andy Cobb’s unique copper art sculptures are owned and enjoyed by clients around the world.

He is particularly renowned for his large-scale, fanciful frog sculptures which are displayed in creative ways both indoors and outdoors. He also produces exquisite copper sculptures of birds, fishes, and other animals with an uncommon level of skill and artistry.

If you have questions, want to know more about the artist, or would like to commission your own copper sculpture, please get in touch. 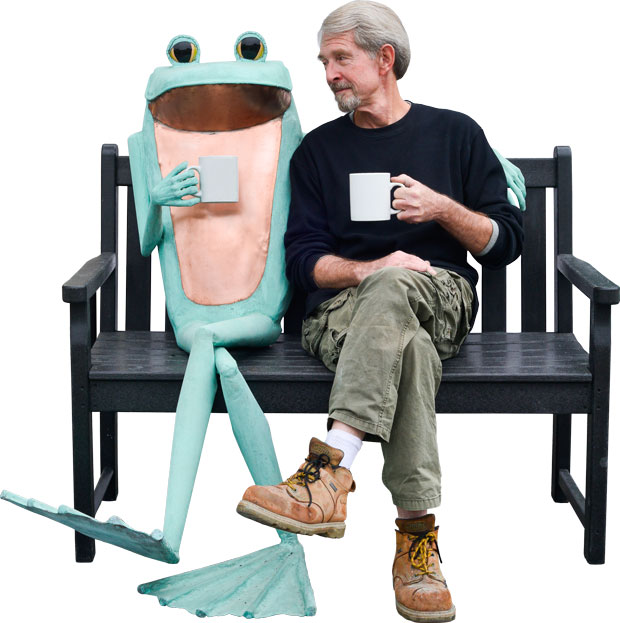 About the Artist: Who is Andy Cobb?

A man who takes his whimsy very seriously.

Once this metal sculptor traded in his three-piece suits and starched shirts for jeans and a shirt, he never glanced back. He found a life he loves. One where five and six-foot frogs in tutus and tuxedos are the norm and his graceful herons and realistic fish sculptures dot the gardens and homes throughout the United States, England, and Canada. This world is far from what Cobb envisioned after graduating with a degree in business from the University of North Carolina, but one he has embraced with both his heart and soul.

What started as a hobby, now keeps Cobb hopping six days a week to keep up with demand. He began by making realistic game fish out of copper sheet and learned to coax the iridescent colors from the metal using the heat of his oxy-acetylene torch, much like using a paintbrush. From the spots of a speckled trout to the stripes and varied colors of a full-sized Blue Marlin, Cobb’s accurate realism made him regionally well known when just a novice.

More About the Artist: Andy Cobb

And then came the frogs.

The first large whimsical frog was patterned after Old Toad from the book, The Wind and the Willows. He wore a vest and morning coat and carried a brass oil lamp.

Cobb fashioned five more large frogs for his first one-man show in Wilmington, North Carolina. This first show also included many copper fish, birds, crabs, shrimp, and sea turtles—thirty pieces in all. The show sold out in two weeks sending Cobb scampering back to his studio to try and manage this new career that had just been launched.

Cobb hand draws each sculpture, then cuts them from sheets of copper. They are then hammered and folded into the desired shape, much like origami. The pieces are then assembled with a brazing process of solid copper usually formed around a steel armature to give them extra strength to last for many years. Last comes the finish, either from a chemically forced patina or a colorful pattern coaxed from the metal using heat.

Cobb is now often referred to as the “Frog Man” due to the hundreds of whimsical, reptilian sculptures he has built for people throughout the country.

“I once wondered if and when I would ever be considered a serious artist. I now realize I’m serious all right, serious about my whimsy. I get several calls and letters each week from people telling me that one of my sculptures made them smile or laugh. What more could anyone ever ask for.”

Cobb lives in Wrightsville Beach, North Carolina—a small village on the Atlantic Ocean—with his wife JoEtta and their rescue pup, Charlie. Their waterfront home is surrounded by graceful, long-legged herons, shorebirds, and other coastal creatures, making it a natural habitat for the subject matter of his sculptures. 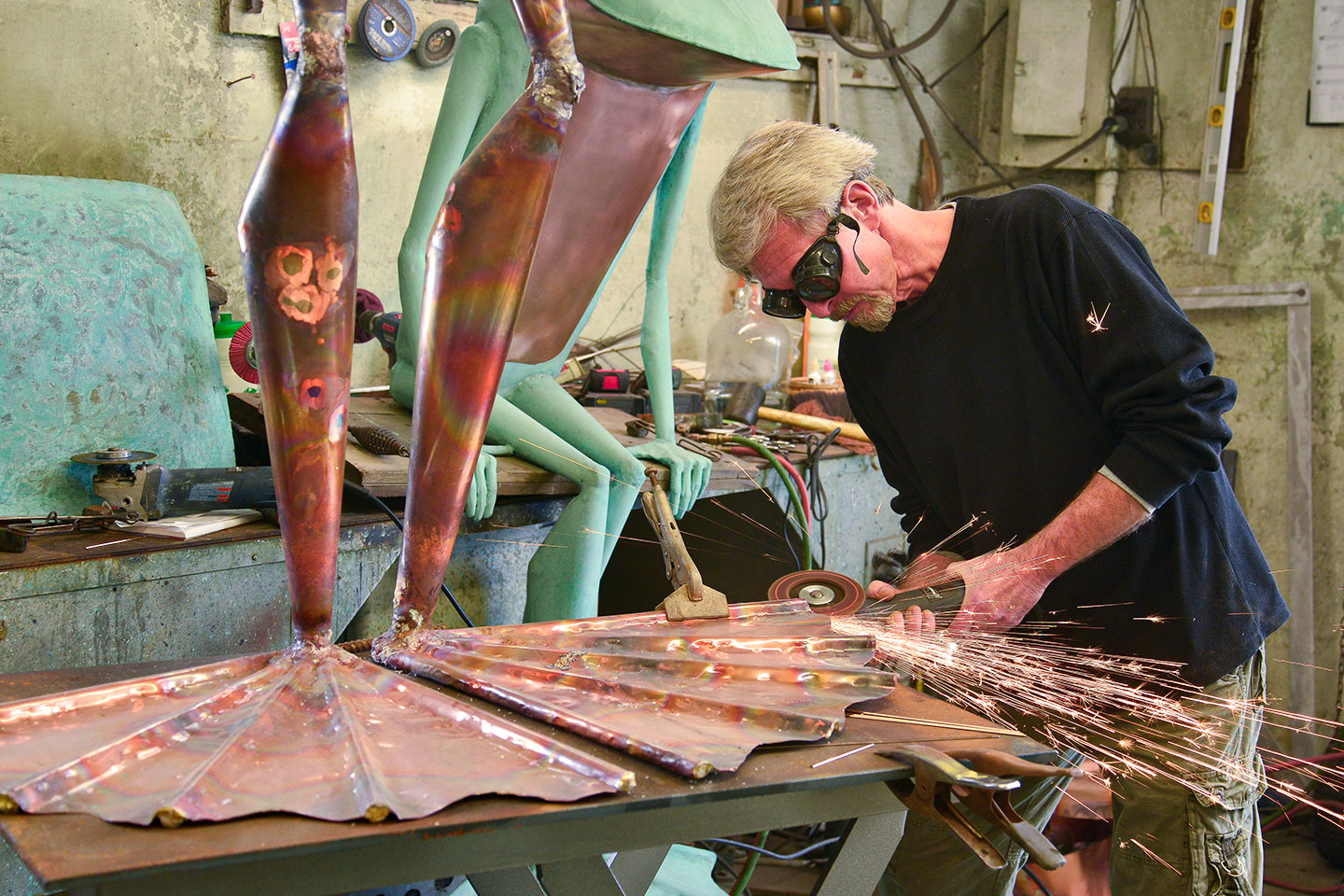 I gave the world of corporate business twenty-one good years. Now I’m taking the rest for me and the whole cast of characters that keep showing up in my mind, clamoring to be made into three-dimensional copper form. 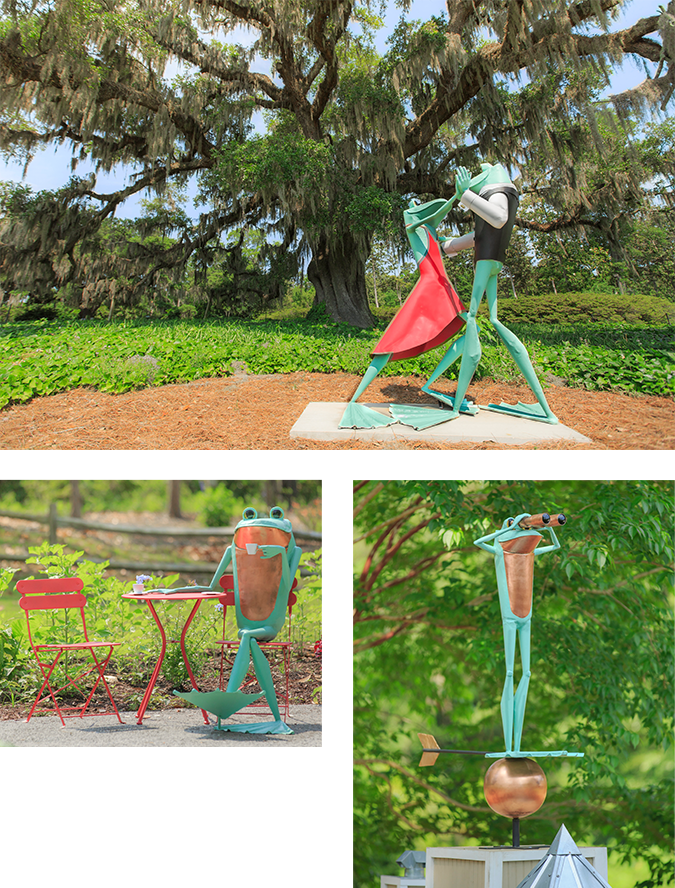 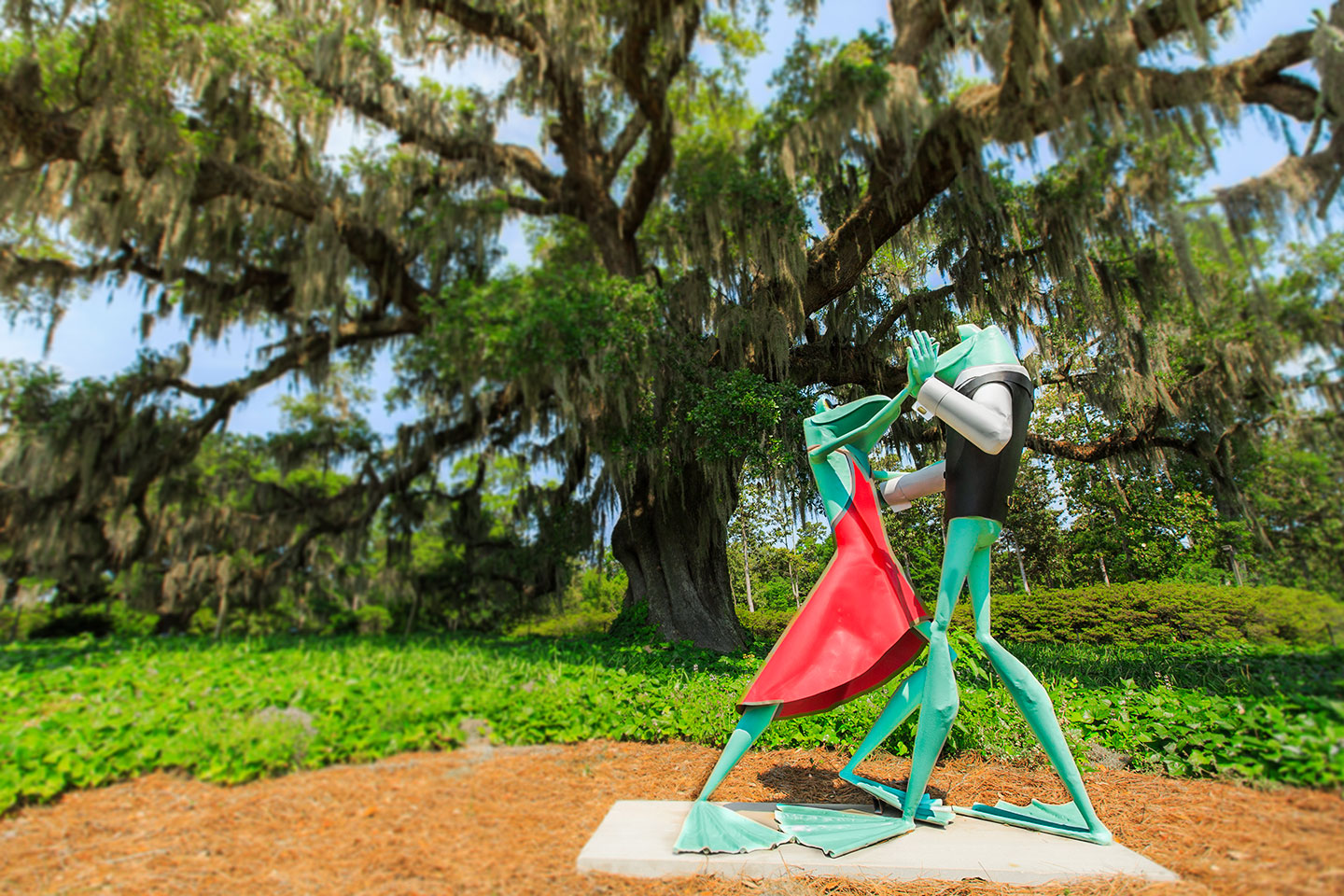 All of Cobb’s sculptures are made from sixteen-ounce flat sheets of copper. Cobb has the unique ability to envision the three-dimensional shapes he desires on the flat sheets. He then hand draws each image, including the cut lines which allows him to hammer and fold the sheet into the three-dimensional image desired, much like origami. These pieces are then assembled using a brazing process of solid copper usually formed around a steel armature to give them extra strength to last decades.

Once the metalwork is completed and thoroughly cleaned, a finish is chosen to compliment the piece. Natural Patinas are often used in this last step.

A patina is an oxidizing process that is chemically controlled to give the sculpture a specific color and texture. Patinas are forced onto the copper and once established, can last as long as the copper itself.

Cobb has also learned to coax vibrant colors from the copper utilizing heat from his torch, similar to a paintbrush. These beautiful pieces are then sealed inside their homes for decades to come. Occasionally, certain pieces will call for paint to enhance the appearance. Using white for a starched shirt or black for a tuxedo. All of Cobb’s sculptures are built to last and require little to no future maintenance.

Learn How It Works 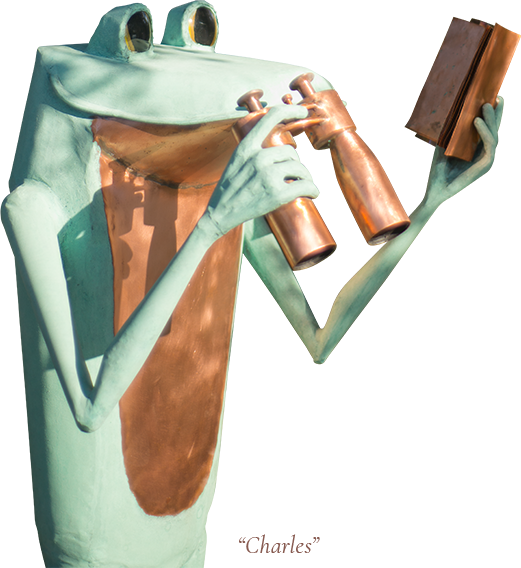